In Search of the Golden Fleece 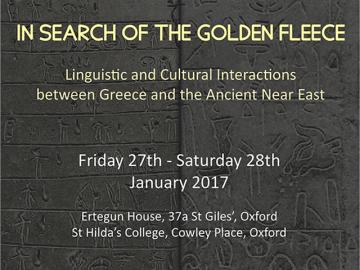 This interdisciplinary seminar featured eleven invited world-renowned specialists from European and US universities (Oxford, Reading, Cambridge, Erlangen-Nuremberg, Cologne, Leiden, Siena, Warsaw, and UCLA), who are specialists in the fields of historical and comparative linguistics, ancient literatures, and writings of the ancient world.

The Search of the Golden Fleece, the myth I chose for the name of this symposium is the journey of a Greek hero towards the East, and conceptually represents what many scholars have done in the past decades, which is looking to the Near East in search of models that influenced Greek culture and literature in a very archaic age. I am also personally involved in this research: my thesis project consists of trying to figure out what were the relationships between Greek and the Indo-European languages of Anatolia before the Hellenistic period.

This has been – to my knowledge – an unicum in Europe, and generally one of the few scientific events organised on the topic: the only other one I know is a conference hold in Atlanta (GA) in 2004, whose papers are collected in a later volume (“Anatolian Interfaces: Greeks, Hittites and their Neighbours”, published by Oxbow Books). But our colloquium has been innovative in that linguistics was the main focus, and the Greek and Anatolian ‘sides’ were equally represented.

It was meant to be something suitable for linguists, classicists, archaeologists and scholars of the Ancient Near East, and the turnout fully confirmed this assumption: according to my final count, the total number of attenders was 90, which exceeded my best expectations. Dozens of student and faculty members from Oxford, Cambridge, London participated, and we even had people coming over from Italy, Germany, Spain, France, Belgium, the Netherlands, Austria, Turkey, Israel, Canada and the United States. Also, and this is very important, we attracted also people who are not currently affiliated with an academic institution

It is a greatest privilege to have been able to gather such a wonderful array of speakers for an event centred on my own research interest. And more importantly, it has been an incredible pleasure to see how broad the interest around the subject was, and how everyone seemed to have a good time listening to the papers and enjoying the delightful environment of the Ertegun House.

I am immensely thankful to the Programme for the resources and the support, and in particular to our excellent administrator Jill Walker, who helped me with countless organisational matters. The resources the Ertegun Scholarship gives us Scholars are, in my opinion, unmatched, and the possibility to organise this sort of events (which, it is worth noting, are not part of a normal postgraduate student curriculum) could be an added value for our cv and constitute a substantial advantage for our future career choices. At the same time, this gives us the chance to experiment new forms of academic communication and put in place events that otherwise it would be much harder to organise (for e.g. funding restrictions) and that may bring together intellects from different backgrounds towards a common goal.