Behind the scenes at the Ashmolean 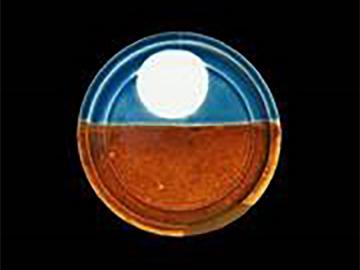 One of my favourite Ertegun outings this year was a visit to the Ashmolean Museum in May. Daniel Bone, Deputy Head of Conservation, took us on a ‘behind the scenes’ lunchtime tour through the world of museum conservation. We began by looking around the intriguing conservation exhibition on the ground floor of the Ashmolean, which, as Daniel Bone proudly pointed out, is the only permanent exhibition of its kind in the UK. Visitors are invited to consider the effect that environmental factors have on the fragile and age-old materials and fabrics. Various painstaking techniques that are used to preserve and restore damaged objects are presented alongside the history of changing attitudes towards the task of conservation. One of the objects in this part of the exhibition that caught my attention was a seventeenth-century Japanese porcelain bowl with a beautiful full moon embellishment. An accidental chip on the bowl had been covered with a delicately patterned gilded patch which, according to the Japanese concept of ‘wabi-sabi’, or ‘beauty in imperfection’, enhances the charm of the original object even more.

Daniel Bone then took us upstairs to the stunning rooftop conservation studio with great natural light, indispensable in this kind of work, and some very fine views of the Oxford spires. I had never been inside a similar space before and it felt intimidating at first: we were surrounded by unimaginably valuable objects that must be handled with utmost care, and I fretted lest I accidentally shatter something! But my initial apprehension soon gave way to admiration for the deep concentration and a sense of minute attention to details that are almost palpable in the studio. Two conservation specialists were around, happy to show us what they had been working on that day. First up were two seventeenth-century paintings, recent museum acquisitions that needed some work before they could be exhibited. We were invited to come up close and examine the paintings in detail: the conservationist responsible for them explained how we can tell which layers of paint might be later additions, and how he goes about deciding what and how to restore. It was fascinating to get a sense of how much those works of art would have gone through before making it to an exhibition room in the museum.

Passing by some alarmingly fragile terracotta pots which were about to be carefully reconstructed, we went into a smaller adjoining studio where the highlight of the tour awaited us. A contractor was busy at work on an extraordinary private commission: the conservation team at the Ashmolean had been asked to detach a Roman sculpture – an emperor’s head – from a Renaissance sculpted torso to which it had had been attached for centuries! The contractor told us in vivid detail how he’d suspended the torso from a huge lift upside down to ease the pressure on the torso and get the head off it. It’s safe to say that you don’t often get a chance to look at Roman sculptures from that angle…!

The lunchtime tour was an exclusive opportunity to get a glimpse of the exciting conservation work going on behind the scenes at the Ashmolean. Many thanks to the friendly stuff at the museum who were so welcoming to us, and, as always, to Mica Ertegun, whose extraordinary gifts to the Ertegun programme and the Ashmolean Museum made this fantastic collaboration possible!